What Alex Taylor did with his prize money

Alex was voted the winner of the Soil Zone in 2016.  We asked him to tell us what he’s been up to over the last year with his $500 and here is what he said…

Since the “I’m a Scientist USA” competition, I’ve become even more committed to science outreach and science communication, and I split my prize money between these two pursuits. About half went to web-hosting a science communication blog I started with some scientist friends at the University of Michigan called Thought and Awe, and the other half went towards gas and incidentals for various outreach events around Southeast Michigan, primarily at local schools, the Detroit Zoo, and the Ann Arbor Summer Festival. In both the blog and the outreach, I worked with Jeff Shi, the 2015 Hydrogen Zone winner.

Working in academic science, I’m confronted daily by the large and seemingly growing disconnect between the scientific community and the wider society. On issues such as GMOs, climate change, vaccines, and evolution, we often seem to be talking past each other.

Both science and society at large benefit when they are mutually engaged. Science is strongest when society provides strong support for basic research, and when many children want to grow up to be scientists and bring their diverse experiences, approaches and questions into the scientific arena. Likewise, society is at its best when empirical evidence is taken seriously and used to guide policy, and when scientific discoveries are quickly turned into useful technologies. I believe that science communication and outreach both play vital roles in keeping this engagement strong.

Good science outreach can help kids discover what science is all about, realize that scientists are real people, and that science is a career path that they could consider. Good science communication can bring people an appreciation of the value of scientific discovery, and the ways that rational, empirical thought can improve their lives. Well-communicated science can dispel myths and help people build an understanding of the world based on the best empirical evidence. And both science communication and outreach are two-way streets: scientists benefit from hearing what questions and concerns are important to the public, and taking the time to explain things clearly and without jargon can help a scientist sort of their own thoughts and get to the heart of the issue. 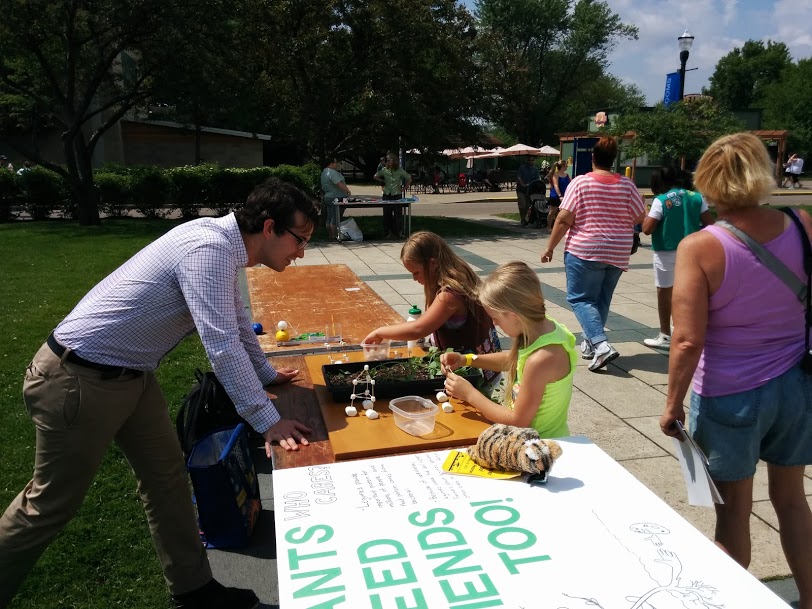 Through outreach events at local schools, the Detroit Zoo’s “Meet a Scientist” days, and the Ann Arbor Summer Festival, I have used the prize money to talk with hundreds of kids about my research, the importance of science, and what it’s like to be a scientist. The “I’m a Scientist USA” competition helped prepare me for their many questions!

The Thought and Awe blog, now hosted using competition prize money, has been read by tens of thousands of people. It has also given 10 young scientists a chance to hone their science communication skills, writing on topics from slime molds to Ebola.

The “I’m a Scientist USA” competition offered a great opportunity for me to reach out to people and engage with them about science, both during the competition and afterwards.