I don’t think there’s a better indication of how people reacted to hearing about I’m A Scientist at the AAAS conference than this comment by user @redekerd during the live chat.

This year’s AAAS annual meeting was held in Washington D.C. and we were invited to run a session providing advice on communication skills from previous winners of the I’m a Scientist competition. 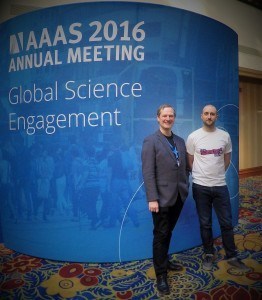 This year’s theme was Global Science Engagement, a fitting topic for I’m a Scientist, a program that now operates in seven countries on five different continents. This is impressive expansion for an initiative that started in 2008 in the UK. In contrast, AAAS is among the oldest scientific societies in America, having been founded in Philadelphia in 1848 and holding meetings annually since 1946.

Before our session I was invited to speak on a panel by Pallavi Phartiyal (Union of Concerned Scientists) and Erin Heath (AAAS) titled Engaging Scientists and Engineers in Policy (ESEP). I was joined by panelists in areas as diverse as broadcasting, public engagement and government policy, including the Chief Science Advisor to the New Zealand Prime Minister, Sir Peter Gluckman, who received the AAAS award for Science Diplomacy at the 2016 conference.

The selection of expertise and experience enabled the audience to get a really nice overview of a wide range of communication areas being presented at the conference. Each panelist introduced themselves and the subject of their session, followed by an open floor Q+A. The session was organized to establish coherence and commonalities between the experts delivering communication themed sessions, with the outcome that there was little, if any, divergence between the core messages and advice originating from the panelists. One of the common threads that came out from the discussion, and was seen across the conference, was the power of honesty and authenticity to genuinely engage the public with science.

The I’m a Scientist session was scheduled for two days later and we were starting to get a number of questions submitted to the ASK section of the AAAS 2016 zone. Just to illustrate the dilemma of ‘the scientist as expert’ @katieeprater asked this question:

I’m a Scientist not only benefits the students; many scientists have a renewed excitement for their work and lots of inspiration after the event, as they detailed in their responses to this question from @elysethegeek:

It seemed like we’d only just arrived at AAAS and yet Saturday rolled round pretty quickly and before we knew it we were setting up laptops, preparing handouts and checking internet connections, ready for our session. Just like the actual I’m a Scientist events, we wanted to make sure our audience could ask questions and take part in the live chat so we set-up a chat room for the event, crossing our fingers that people would have devices they could use to access the site and the AAAS WiFi in the room would be fast enough for everyone to participate.

Well, it was! Not only that but people had no problem logging on from their phones and participating. Describing the experience of a live chat is one thing but actually logging on and taking part familiarizes the experience of the I’m a Scientist events far better and enables people to visualize what it is really like chatting simultaneously with thirty or so young people. 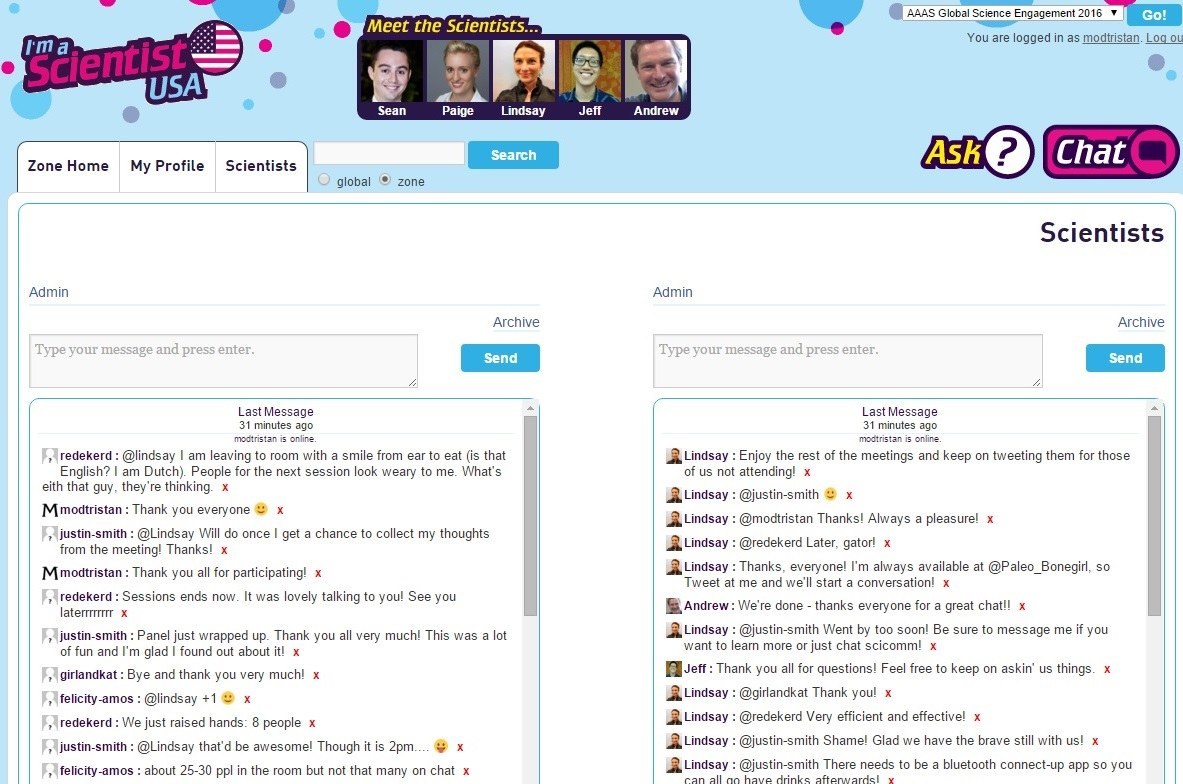 Twenty-five to thirty people attended the session, mainly composed of scientists looking to improve their communication skills and science communicators. In order to pitch the session appropriately we elicited the existing knowledge in the room about I’m a Scientist. The vast majority of the participants were completely new to I’m a Scientist so we spent some time introducing the program, explaining how it worked and the application procedure.

Judging by the twitter comments it was aspects such as the ability to connect scientists with marginalized or underrepresented minorities, the safety of the platform, the ability to see winners’ successful engagement and the fact that I’m a Scientist is a competition that most appealed to the attendees.

Following this we provided some examples of good answers to the application question “How would you describe your work to a 13-year-old in one sentence?” and asked the participants to try this for themselves, comparing their descriptions with those sitting next to them. 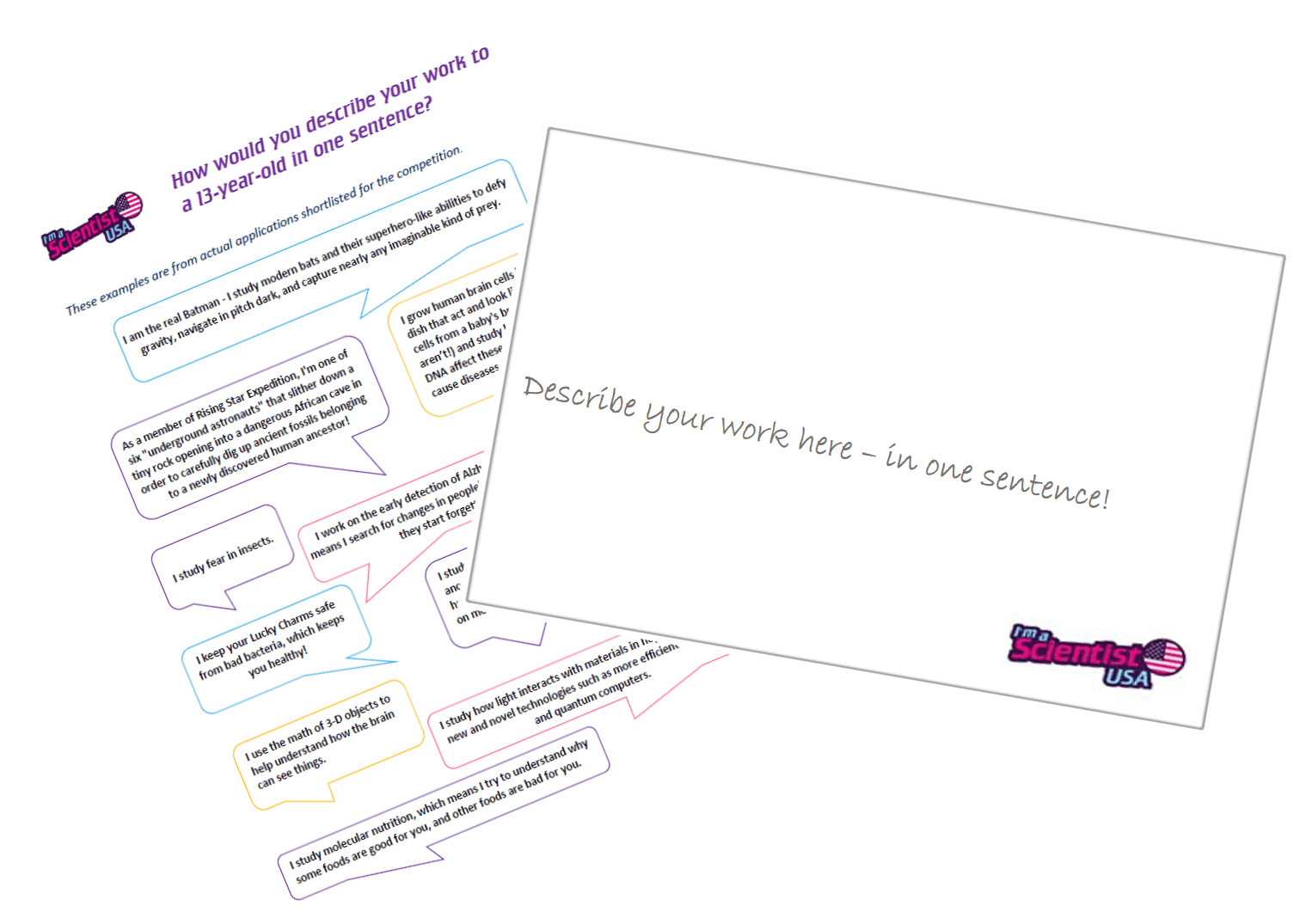 In the meantime, our moderator for the day – Allyson MacLean (@allybear64) – opened up the chatroom so people could log on and start asking questions of our experienced competitors. We had eleven people log on to the live chat and a flurry of questions to myself and Andrew in the room. We were able to demonstrate just what ‘Global Science Engagement’ is by connecting not only American based scientists but also Lindsay Hunter in South Africa with the AAAS attendees.

As the majority of those present were novices to the program, a degree of familiarization with the format and the way the chats worked was required, with Andrew and I answering questions relating to the two windows and how to submit questions. We were also asked about the students who take part, the application procedure and the ability of the participants to share images or video with the students. The attendees initial impressions were extremely positive and once people were familiar with the way the site works excellent questions were being posed to our scientists in the live chat as well as in ASK, such as:

girlandkat : If you get picked for the “I’m a Scientist” panel, what is the commitment? (e.g. number of live chats, other activities, length of time on the panel)

Andrew : @girlandkat – commitment varies. I was spending an hour or so a day – but it went really fast, and was exceptionally rewarding

We hoped the session would inspire more scientists to apply to the competition and judging by the many conversations we were engaged in during and after the session, and Justin Smith’s comment during the live chat, the next time we run an event we’re likely to have a flood of new applicants.

justin-smith : I’m thinking of applying. This is right up my alley.

justin-smith : In fact, revise that, I’m definitely going to apply. I think this is awesome.

The AAAS conference was a great opportunity to share what the I’m a Scientist team and competitors have learned about science communication from over 5,000 live chats and answering 83,000 questions, as well as to connect with new scientists and communicators working in the sector.

We’ll sum it up with this quote from the live chat:

If you would like to take a look at our presentation you can download a pdf copy here.

Posted on February 18, 2016 by modjosh in News. Comments Off on Building Your Communication Skills with Winners of the “I’m a Scientist” Competition